Kaala: The Flower of Lanai 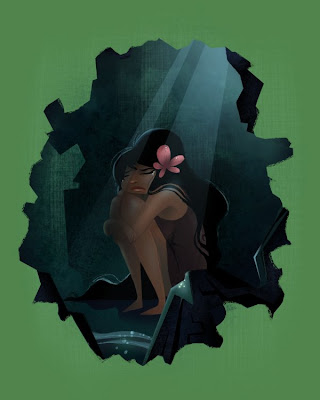 While she is technically not a god, I found Kaala's legend too beautiful to resist illustrating. Daughter of Chief Oponui of Lanai, she was said to be the most beautiful girl in all the island. Kaala fell in love with Kaaialii, a lieutenant to the king of Hawaii. Oponui hated Kaaialii, and would do anything to keep Kaala from him. After Kaaialii fairly won Kaala's hand in marriage in a battle with another man, Oponui tricked his own daughter into following him to the sea shore, where he trapped her in a spouting cave far below the waves. He intended to tell her new husband that she had died tragically, hoping Kaaialii would then leave the island forever. Kaaialii did not leave, however, but went in search of Kaala. He finally found her in the sunken cave, but it was too late -Kaala died in his hands. Devastated, Kaaialii took his own life so that he could be with Kaala in the cave forever. Legend has it that to this day, the bones of the two lovers can still be found in the murky depths of the cave.

Kaala will be a mini print available at APE this weekend. I still have a bit more to do before then, so I will be posting more details this week. I am also hoping to open an Etsy shop soon for those of you who can't make it to APE, so stay tuned!
Posted by Brittney Lee at 12:55 PM

Absolutely amazing!. the story of the Flower of Lanai is one of my most favorite stories!. It literally made me cry. It's good to see someone take the time to paint and do history on the subject. I love your artwork, it's very Maika'i (good).