I'm back from my first ever trip to Comic Con, and it was awesome! It was a whirlwind of a trip, but totally worth it. Bill, Mayka, Dave, my friend Sean (who flew out from good 'ol PA), and I left for San Diego on Thursday morning and stayed through Sunday. We all saw and did so much that I feel like I am just starting to get back to normal now. Anyway, here are a few pics from the trip: 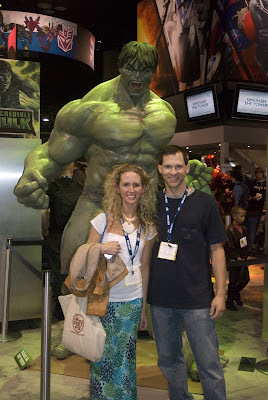 Sean and I Hulkin' out. Doesn't he look like Eric Bana? I think so. Especially when he turns green and rips things apart. 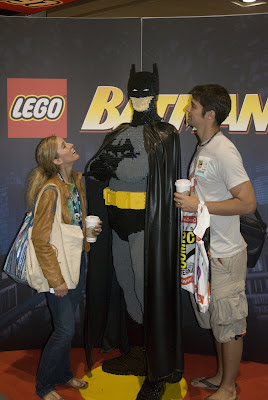 Dave and I gaze whistfully(?!) at the Lego Batman. I don't know why we are whistful. We didn't plan this out very well. 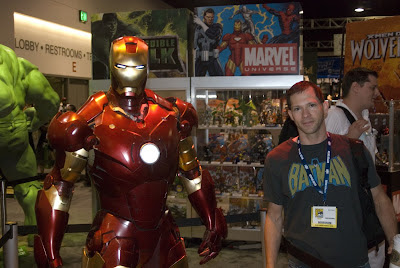 I don't think he meant to stand in the exact same pose as Ironman, but I found it quite amusing. 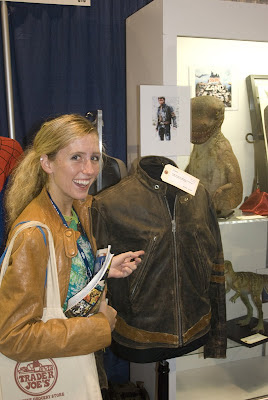 Upon our arrival in San Diego on Thursday night, Mayka informed me that I had missed Hugh Jackman, who had shown up to promote "Wolverine" during Thursday's convention. HUGH(the Australian love of my life) JACKMAN!?! I was devastated. That is, until I found his Wolverine jacket on the convention floor the next day! Not quite the same, but as you can see, I was still excited. It was probably better this way anyway because if I had known Hugh Jackman was going to be there on Thursday, I would have made everybody leave at 1am to make sure we were there in time to see him. And nobody would have been very happy with me about that. 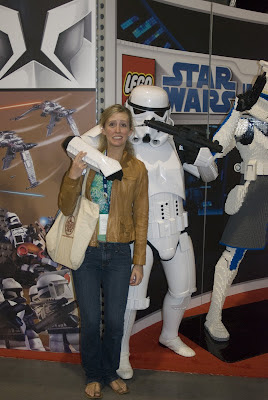 Oh, and here I am being abducted by a Storm Trooper. Good times. 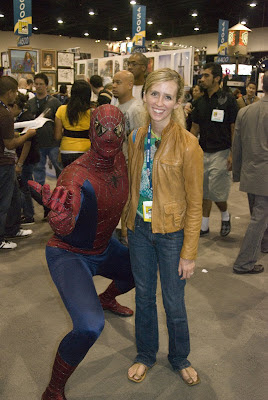 Spidey savin' the day. I should work on my poses. I'm not nearly as exciting as the rest of the people in these pictures. I guess an elaborate costume would help, too. Maybe next year... 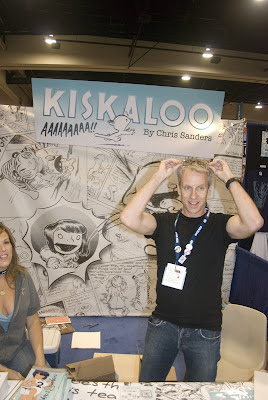 Chris Sanders! I am off to the right distracting Chris with my uber-geeky "I'm such a huge fan!" ramblings while Sean snapped this shot. In my super-excitement over meeting this guy, it never once occured to me to ask to take a picture with him. Someday I'll learn to calm myself down. But it was fantastic to meet him - definitely a highlight of my trip. 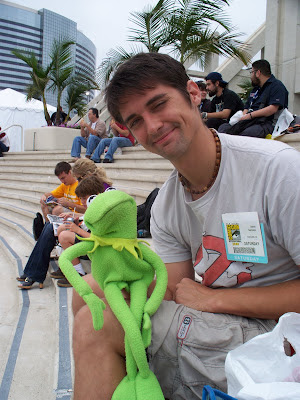 Dave's only purchase of the trip, and he couldn't have found a better souvenier. He has been looking for a full-body Kermit puppet for years and I can't accuratley describe how his face lit up when he saw this guy at a used toy booth. It was priceless. 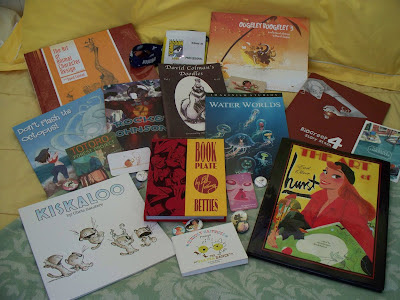 And here is my haul. I just have to say that coming from a small town in PA that is so far removed from any type of industry, you never think that experiences like this are possible. To be surrounded by so many talented people who I have looked up to and been inspired by for years is just awesome. And who knows, maybe someday (when I'm all grown up) I will have a Comic Con booth of my very own. Anyway, I am so inspired from the trip that I hope to have a few more posts of new artwork in the near future, so stay tuned. But for now, thanks for stopping by! I will leave you with this moment of Zen (featuring Dave on lead vocals and myself as" the puppeteer"):

It was my first Comic Con too. I felt like such a dork meeting some of my favorite illustrators. I'm still kicking myself for not getting a photo with Gris Grimly.

it was nice running into you guys at the con! looks like you walked away with alot more sweet loot than i did. hope all's well up in SF.