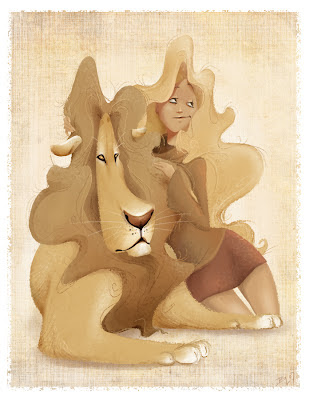 This was originally going to be my submission for last week's Illustration Friday topic - "Zoo" - but it unfortunately took longer than I had hoped. Luckily, I think it still works well (maybe even better!) for this week's topic - "Excess".

There is a bit of a back-story for this illustration. Apparently, I look like a lion. Really. I was informed of this in the sweetest way possible by a co-worker's wife one day while standing in the kitchen at work. I was also told that if anyone says otherwise, they are lying. So don't even try, because it won't work. Basically, I have A LOT (i.e. "Excessive"amount) of hair. It looks like a mane. So much so, in fact, that at first glance it might be startling. You might think that a lion is walking around the corner. But really, its just me. So don't worry too much.

Here I am with a lion. We do have quite a few similarities, but I hope this illustration will help you to tell us apart. Thanks for stopping by everybody! Have a great weekend!
Posted by Brittney Lee at 3:12 AM

incredible!
This is really amazing. love this.

what a lovely piece of work, lions are brave, strong, fine animals...

I've never been too fond of people's unsolicited opinions...but you seem to take it in stride! Very nice painting!

Wow Brittney! Another great painting. I love the way you design the two figures shapes to correspond to one another.

You should get a lion and bring it to work.

What a great composition!!

Very nice illo. This does work better with excess. Your characters are awesome.

This is great! Love how you repeated the shapes of the hair and mane. And your colors are so warm, they pull me right in. Fantastic.

Glad to have discovered your blog. The art is fantastic and I'll be sure to stop by more often!

This is perfect! Great composition and facial expression. I love the background texture too. Really nice work.